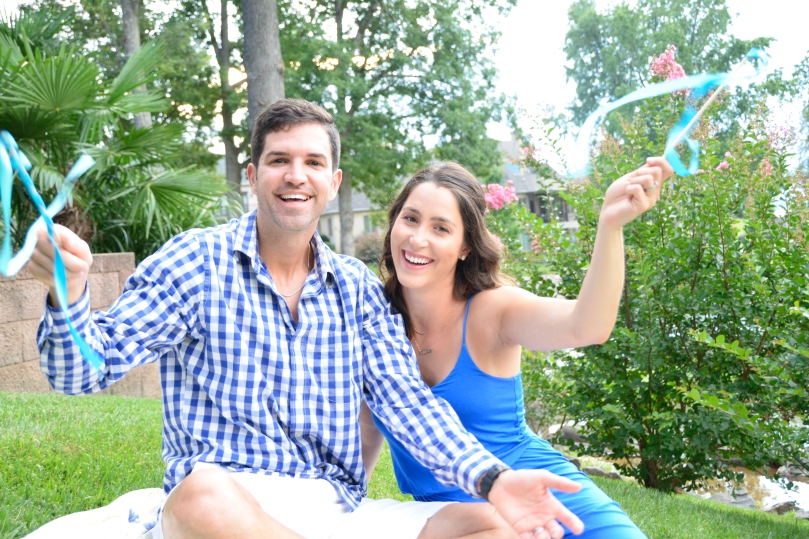 I have officially hit 20 weeks- halfway through my pregnancy. Yesterday we had an ultrasound appointment with my doctor and this was when we were supposed to find out the baby’s gender. SECRETLY we have known for over 2 weeks now…  You may be thinking “What??!”

Well…I’m going to tell you the story : )

Kendrick and I flew to South Carolina to visit his family during the week of  July 4th. Our nephew was born January 7th of this year, and we had not gotten to meet him yet. We had no plans of finding out the gender at this time, nor did we even know there were such places where we could find out. The first night at dinner, his sister told us about 3D ultrasound clinics that also offered gender reveal packages. As soon as Kendrick heard this he exclaimed, “We have to go!” We looked up where the nearest clinic was located, and how much the package cost. We were surprised to find there was a clinic only 20 minutes away from his parents house. The website said that if for some reason the technicians couldn’t figure out the gender, you were welcome to come back another day at no extra cost.

Kendrick was sold – but I was hesitant. I am very much a planner, and this was NOT in my plan. I had a very strong instinct of what I thought the gender would be, and although we both wanted to find out, I somehow felt like I was cheating the universe. Kendrick was understanding and told me to sleep on it, and that if I wasn’t comfortable, we didn’t have to do it. When I woke up in the morning, I revisited the website and thought, “What the heck! I’m gonna do it.” So I called and made an appointment for later on that day.

I had talked to Kendrick the night before about what the benefits would be if we found out. The biggest benefit was being able to tell our family in person, which was a HUGE plus. Living in California, most of our news is given over the phone or on FaceTime…which isn’t necessarily bad, but it’s definitely more exciting to be able to celebrate good news in person…I think everyone would agree! Another benefit was that I had been planning to have my sister-in-law take maternity/gender reveal photos for us…initially, we were going to take both blue and pink photos (since we didn’t know what we were having) and use either one or the other after we found out. Well…you can imagine how overjoyed Kendrick was when he realized that we would only have to take ONE set of photos instead of two…ha ha.

Fast forward a few hours later…and we were on our way to find out whether our baby would be a little girl or a little boy! I had butterflies in my stomach and kept wondering “What if my instinct is wrong??” The suspense was killing me! The clinic was located in Fort Mill, a cute little town south of Charlotte. As soon as we walked into the clinic, we were greeted by two very friendly women who would be performing the ultrasound for us. The room was bright and inviting, and as I lay back on the table I knew that in a few minutes we would find out the best news of our lives!

After what seemed like forever, the technician finally got to the baby’s legs and told us she was going to look for the fateful sign…however, the baby’s legs were crossed and she couldn’t get a good image. I started getting nervous and wondered if we would have to come back another day to find out. She told us to be patient, and that she was just waiting for them to move. And as soon as they did…she pointed her fingers up to the screen and said “Do you know what that is??” I was just looking at her fingers which were shaped like a “V” instead of looking at the screen. In my head I was thinking, “Oh my gosh …it’s a girl.” (I was surprised by this because up until now I swore I was having a boy). Quickly I heard Kendrick exclaim “It’s a PENIS!” And then I laughed because there it was…plain as day. We were having a boy…which is what I thought all along!!

A funny side note, right as the technician revealed we were having a boy, Kendrick looked down at his phone and saw that his dad had texted him with a prediction, “It is a boy” he said. And he was right! 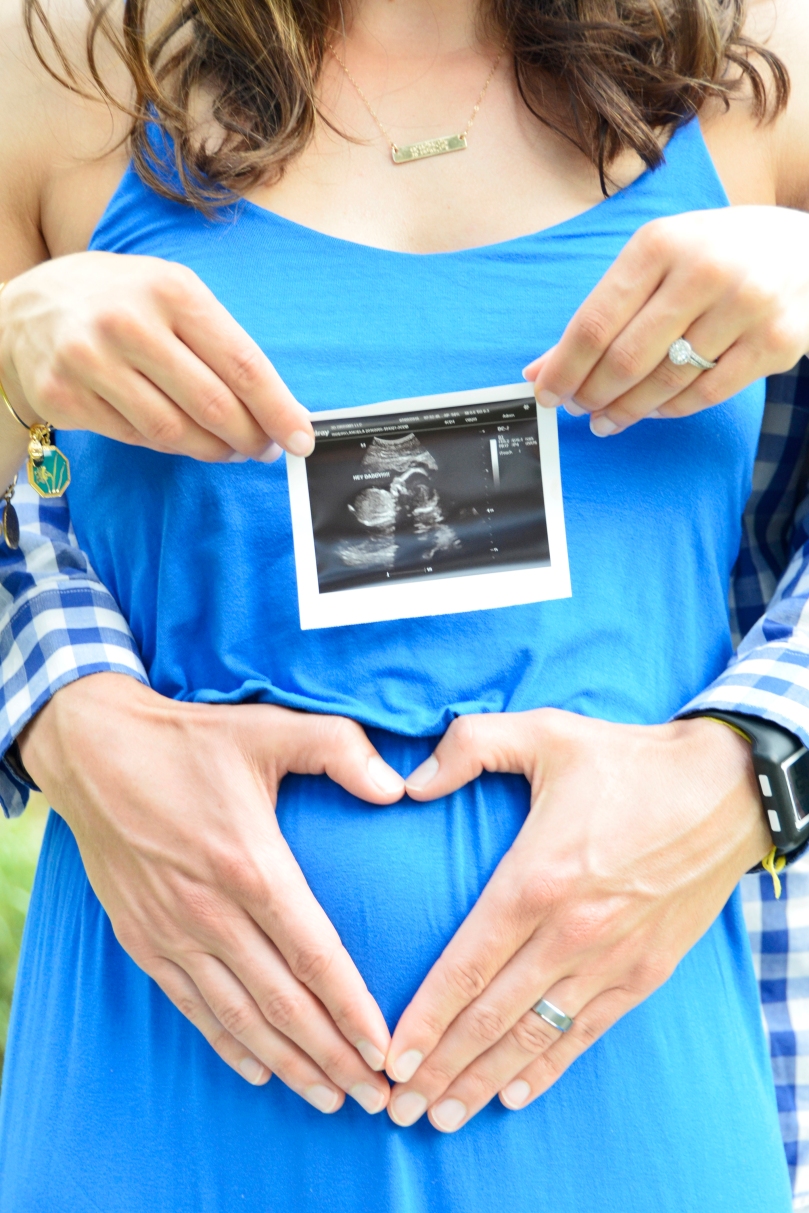 We had such a wonderful experience at 3D Dreams in Fort Mill. Included in our package was 20 black and white photos and as a bonus they even gave us a DVD of the whole session! It was so special to be able to listen to baby’s heartbeat and watch him on screen with our family at home. I highly recommend visiting a 3D ultrasound center for anyone who would like to know their baby’s gender. When we had our scheduled appointment yesterday, we were actually pretty disappointed because it was a very formal experience. We just had a radiology specialist perform the ultrasound instead of our regular OB, and she was very technical since her main job was to do an anatomy scan (look for any irregularities or concerns). We left the appointment reflecting on the wonderful experience we had at 3D Dreams and we’re SO happy we decided to do it. 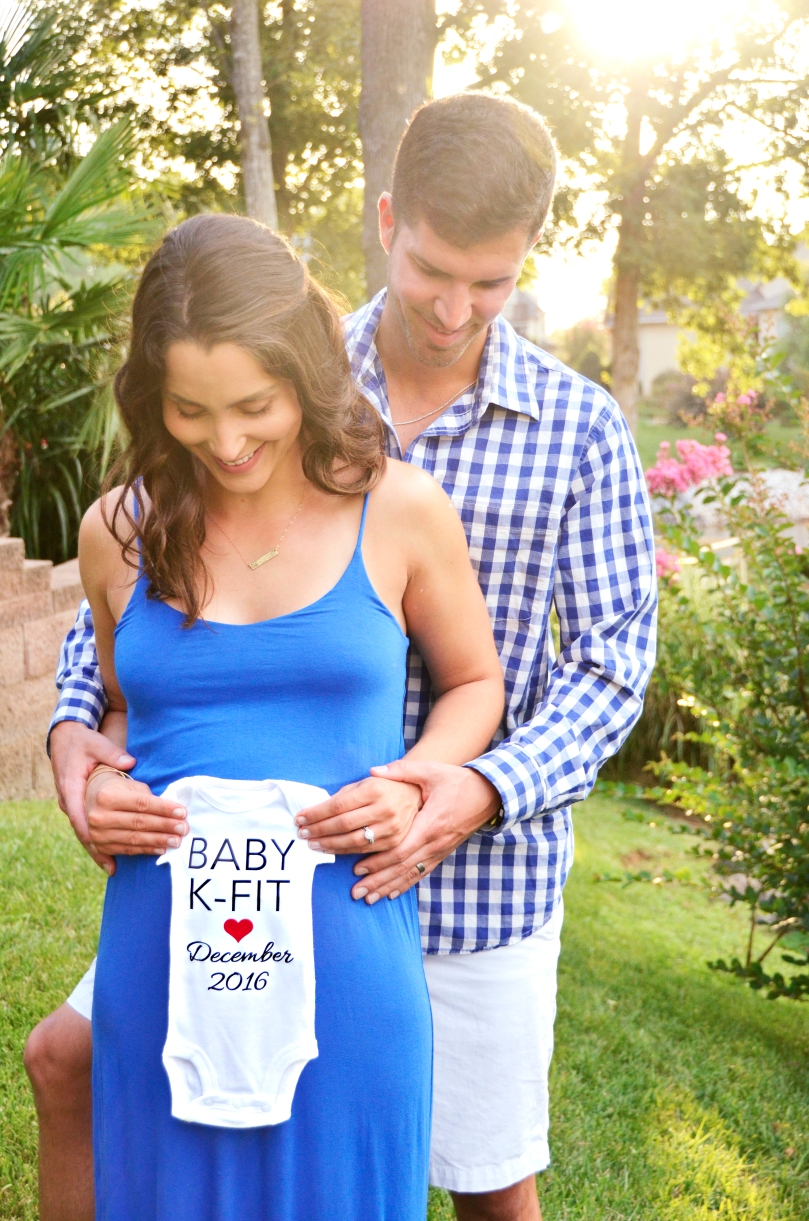 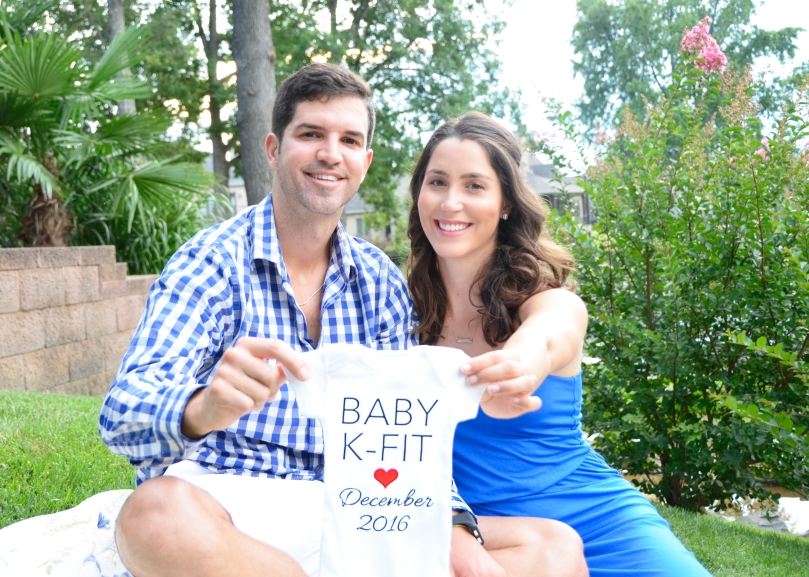 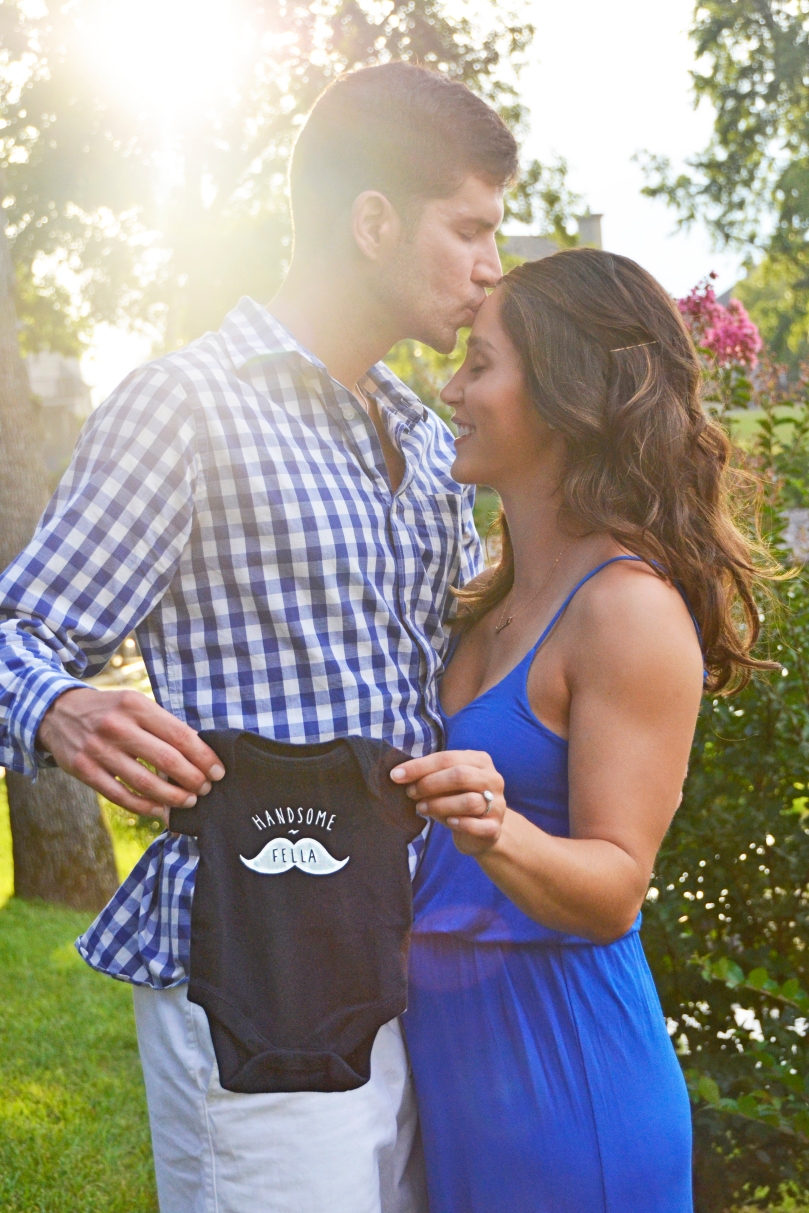 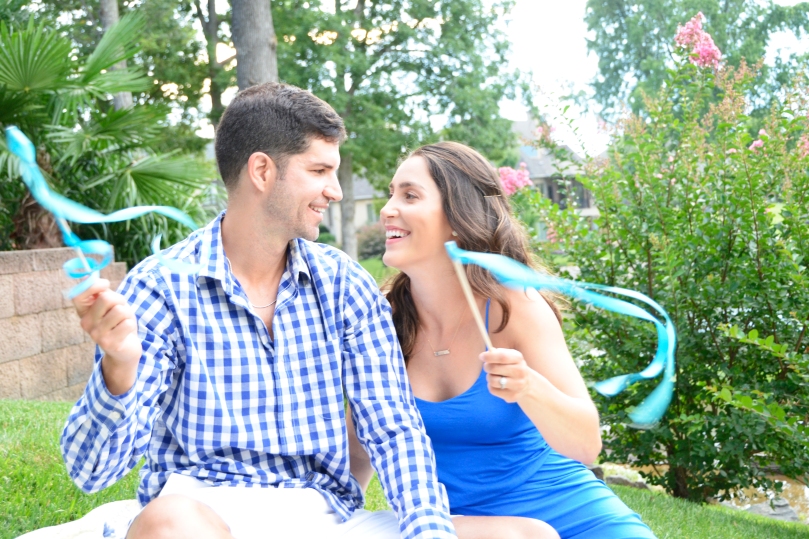 All these beautiful photos were taken by my incredibly talented sister-in-law Lauren. She also took maternity photos for Kendrick’s sister and everyone in the family keeps urging her to start her own business!

We took these photos on July 8, which is my sister and brother-in-law’s anniversary. Those who know our story know that we met during the weekend of their wedding 4 years ago…( I was MOH and he was Best Man). Pretty crazy that just 4 short years later we’re pregnant…and my best friend turned sister is taking maternity photos for us!

Here’s a couple photos from our gender reveal ultrasound (just shy of 18 weeks). As of yesterday (20 weeks), he weighs 12 ounces and is expected to arrive December 7! 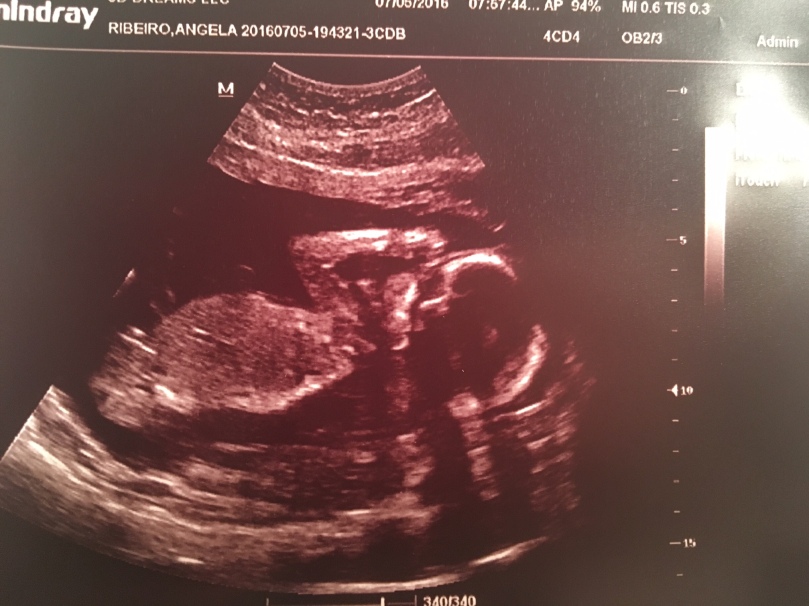 Sucking his thumb, a habit he inherited from dad 😉 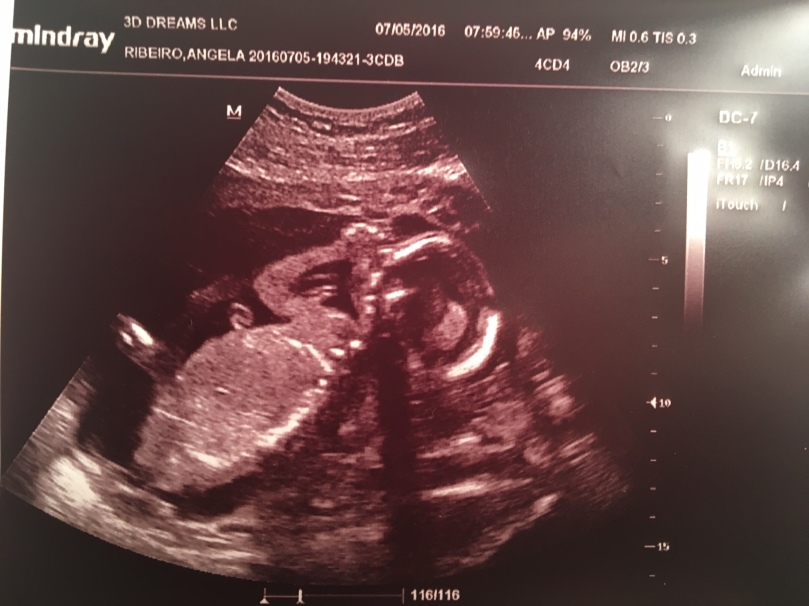 Here are a few hopes I have for you…

I hope you grow up to respect women like your Daddy – you have A LOT to learn from him. 😉 He is such a good man. Always have courage to do the right thing and be kind. Love is your greatest power and gift to the world. Everything stems from love…because God is love and God is creating you right now, week by week.

“Where your treasure is, there your heart will be also.” Matthew 6:21

Always follow your heart, the heart that is beating inside me and can hear my heartbeat. You’re the only one who knows my heartbeat from the inside.

Link for my dress is here.

Handsome Fella onesie is from BabyGap.

Custom announcement onesie is from this Etsy shop.

Ribbon wands are from Etsy.